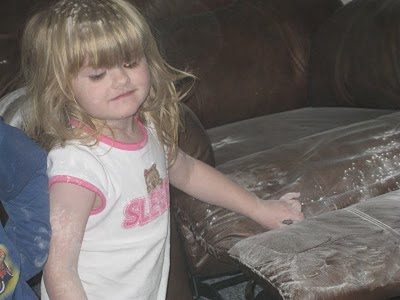 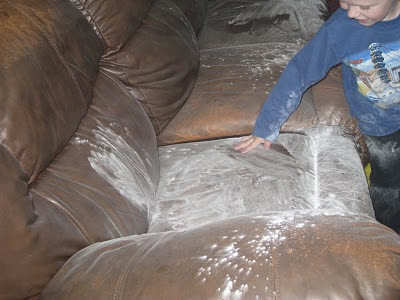 We took the kids on their first Tent Camping experience over the weekend.  And of course, our first night there we had severe thunderstorms with almost continuous lightning and rain that sounded as loud as a waterfall.  Luckily the rain didn't start until almost 9pm so we were able to get the campsite set-up, have dinner and were almost ready for bed when it started.  Unfortunately, the kids were definitely not going to go to sleep with the light and sound show going on.  At first, they said they were scared by the storm but they gradually settled down and ended up having a good time in the tent.   Each of the kids had their own flashlight, which was a good thing since someone (who me?) forgot the camping lantern. 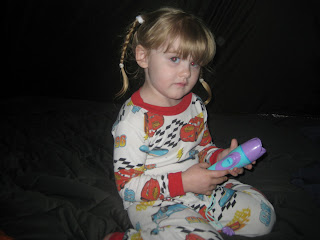 First they played a game where they took turns dancing in the "spotlight" from one of the flashlights. 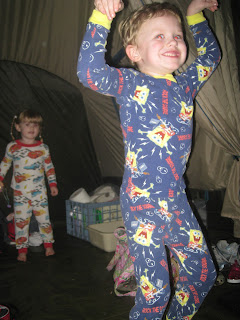 I had brought glow sticks left over from Stephanie's 13th birthday party (yes, 3 years ago) and the kids played a game throwing them up in the air and diving after them on the sleeping bags.  Daddy had fun playing this game with them and of course jumping around like lunatics helped them settle down to go to sleep {insert eye roll here}. 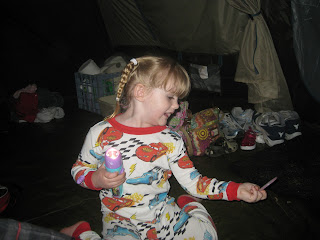 After about an hour, the initial wave of rain started to slack off and the kids started to wear down.  Mom was the only one awake for the three subsequent waves of rain, thunder and lightning.  Not a great start to the weekend, especially not when Vicki woke up at 6:30 am.
The campground we stayed at was not far from where Daddy grew up in South Jersey.  Previously a quarry to excavate clay for a local brick company, there are 25 "lakes" that are actually excavations that filled in with water.   I would call them more swamps or ponds than lakes but there are many paths and hiking trails weaving in and out of the ponds with plenty of opportunities to see native wildlife and leading to great discussions on camouflage. 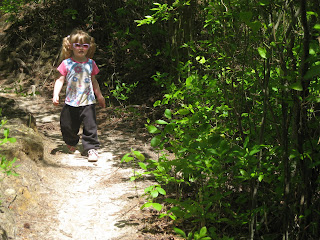 In addition to the great hiking trails and abundant wildlife, the campground also had a great playground.  The kids loved climbing on the geodesic dome.  Georgie was actually pretty brave and climbed all the way to the top and dropped down through the middle. 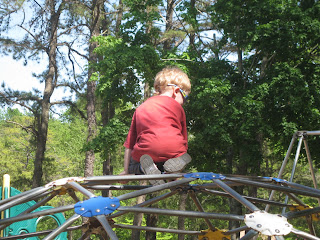 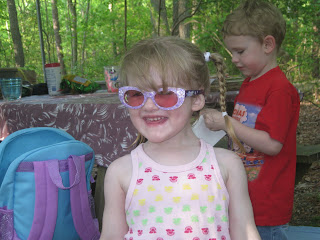 Despite the wet start the kids had a great time exploring the outdoors and enjoyed their first camping trip.


To see what others are doing check out Preschool Corner and 5K too and Homeschool Creations.

We took a field trip to Crystal Caves with our local homeschool group.  I made the mistake of telling the kids we would pack a picnic lunch to eat there.  Georgie decided he needed his backpack to carry his lunch like he used to when he went to school.  Not a problem, I actually even knew where his backpack was.  Vicki decided she needed her Dora backpack.   After searching the dress-up box (where most of the backpacks, purses, etc. wind up), the toy cabinets and the hooks where the rest of the tote bags are kept I suddenly realized.....Vicki doesn't have a Dora backpack.   I managed to convince her to use the backpack that came with one of her baby dolls instead, which of course meant a baby doll had to come along. 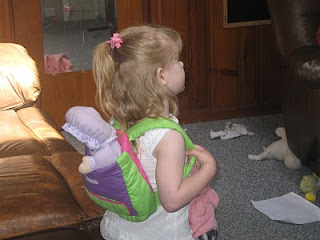 The picnic area was right next to a small stream and field of wildflowers.  Vicki had fun poking the water with a stick and eventually ended up wading right in, soaking her shoes and her jeans to the knees.  Another mom was nice enough to offer me a dry pair of pants but I told her we'd be fine.  I'm glad I didn't bother changing her since once we were in the caves Vicki proceeded to jump in every standing patch of water in there (and if you've ever been in caves, you know they are WET.) 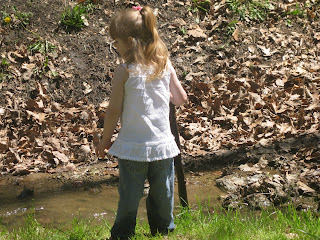 Georgie accidentally got his shoes wet so sat down for a while blowing dandelions so his shoes could dry.  It was a pretty warm day outside but the caves are chilly.  Vicki didn't care that she was wet to the knees but Georgie hated that his shoes were a little damp. 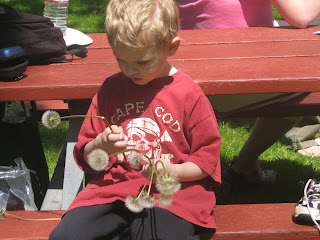 Once we hiked up the path to the entrance to the caves (and mom recovered from her near-heart attack from carrying Vicki all the way up) we saw a brief presentation about the caves.  By this point, everyone in the place knew Georgie, both from him going around introducing himself and from me constantly calling "Get back here George", "Don't touch that George", "Sit down George" and just plain old "GEORGE!!"  It also helped me make a very important decision.  I was thinking about attempting to take the kids to see Toy Story 3 in theatres this Summer.  I don't think its going to work.  Georgie cannot sit still for more than 2 seconds at a time, while Vicki likes to provide commentary while she watches a movie.  "Look an arrow. It's pointing to the rocks", "Look a waterfall how pretty", "Oooo those rocks are Bea-U-ti-FUL".  The mom sitting next to me was laughing and observed how Vicki doesn't miss a thing while I just wanted to hide.
Once we were in the caves I tried to stay toward the back so the kids wouldn't be too disruptive of the guide speaking.  The kids had to be watched very closely since the floors were wet and slippery, there were a lot of steep, rough stairs and I didn't want them falling down a crevasse.  We made it through in one piece.  The kids both enjoyed looking at the different rock formations but Vicki had the most fun stomping in the various puddles and swinging from the walkway railings. 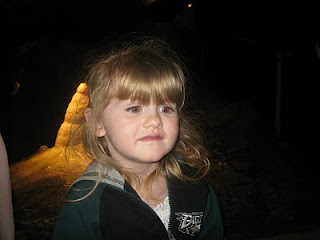 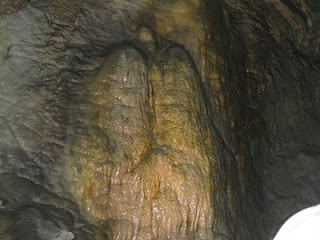 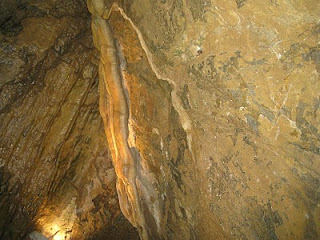 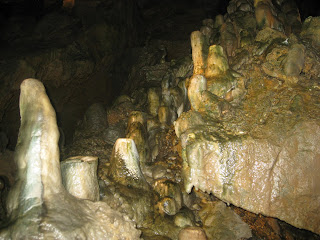 After our tour of the caves we did some panning for pretty rocks.  The gift shop provided bags of various stones (quartz, peridot, pyrite, citrine, amethyst) in a lot of sand.  The kids poured the bag into a screen and held it in running water to wash away the sand and reveal the stones.  This was a lot of fun and something I've been thinking about trying to adapt to do at home when we study rocks and minerals. 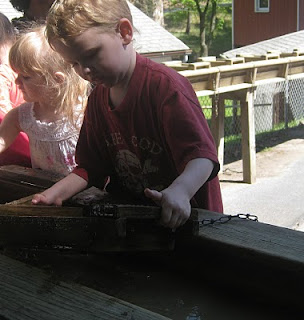 Vicki also had lots of fun playing in the water flowing into the trough.  The little girl was quite wet by the time we were ready to head home. 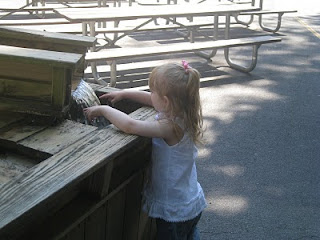 Overall the trip was a lot of fun but I don't think I'll be doing it again until they are a little older.  It ended up being a two hour drive each way, I don't think they actually learned much since they payed very little attention to the guide and keeping track of both of them in the caves was exhausting for me.
Posted by Dottie at 10:28 AM 1 comment: 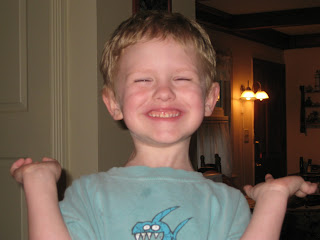 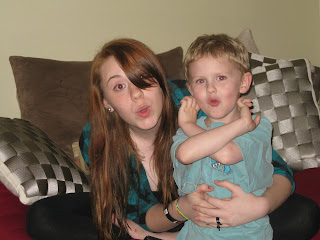 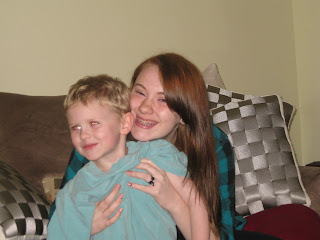 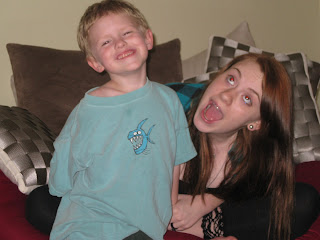 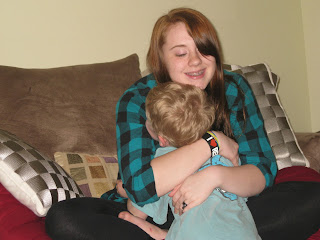