Camping with the Stars!

I've always been interested in astronomy.  And I've always hated when I would see on Facebook or in the news about big astronomical events like lunar eclipses or meteor showers or whatever because we live where there is a TON of light pollution.  Like New York City level light pollution.   So, when I saw one of those articles recently I decided to look up how far away we would have to travel to be able to see better.

And while I didn't find someplace relatively local where we could take a quick trip to see these special events, I did find out about Cherry Springs State Park.  Cherry Springs is a Pennsylvania State Park known for it's exceptionally dark skies.

And then while thinking about where to go camping 4th of July weekend, I discovered that there was going to be a new moon that weekend.  Perfect for star-gazing!

So we spent our weekend camping at the Allegheny River Campground, enjoying the campground activities during the day and checking out the skies at night.

Our tent site was right on the banks of the Allegheny River.   Normally it's possible to kayak and raft down the river but the river was very low while we were there.

It took us about 5 hours to get from home to the campground so our first evening was spent setting up camp, enjoying a nice fire, and roasting marshmallows.  We were all a little surprised by how COLD it was at night.  Temps were down around 48-52 degrees each night and only hit the mid-70's during the days. 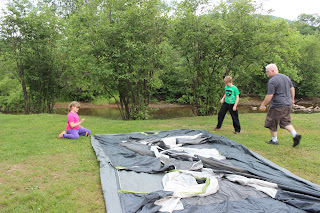 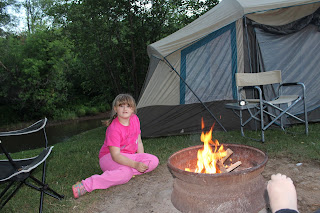 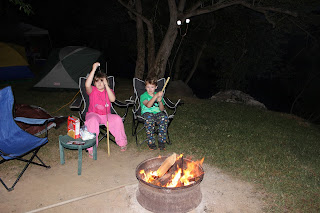 Our puppy Andy came on the trip with us and all of us had fun wading in the river.  Squidy was a little bit bored until they discovered a huge group of tadpoles to catch (and release later). 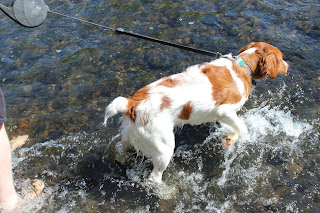 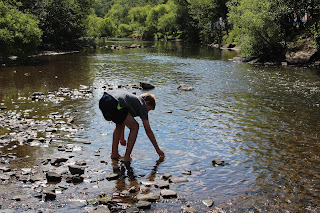 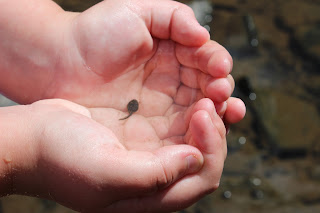 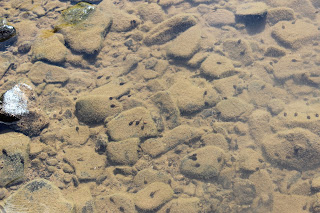 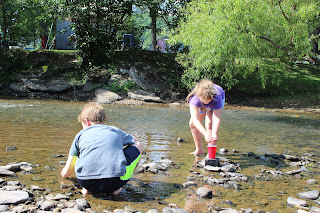 The second night we took a drive over to Cherry Springs.  This was supposed to be the clearest of the nights but it was still pretty cloudy.

They did a brief family program while it was getting dark.  They measured out 100 feet, then had people represent the various planets and had them stand in the correct position proportional to where they are in the solar system.  Vicki was Mercury while Squidy and Daddy helped with the measuring. 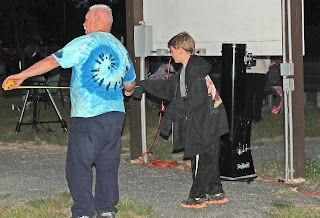 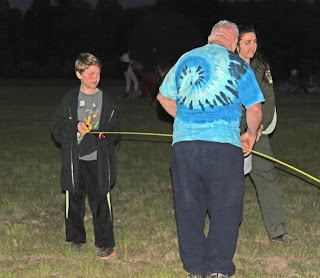 It wasn't a great weekend for star-gazing because it was actually pretty cloudy, but we were able to see Mars, Jupiter, Saturn, the Milky Way, the Big and Little Dippers, Cassiopeia, and a few other constellations, as well as some beautiful sunsets.

The kids were a little whiny at the beginning of the night but they ended up enjoying it and Vicki commented on how many more stars we could see.

I took pictures using the kit lens with my Canon Rebel. 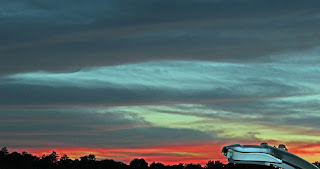 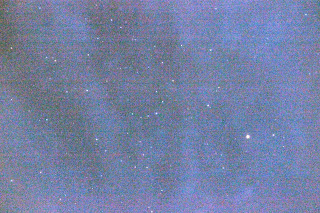 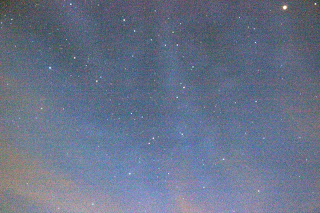 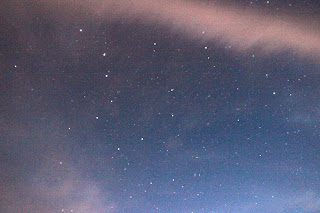 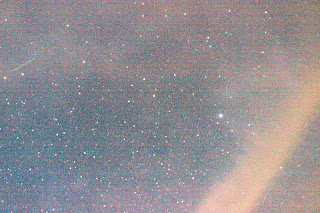 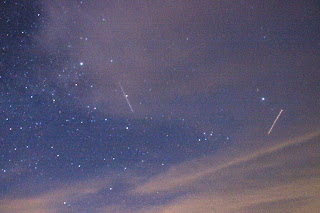 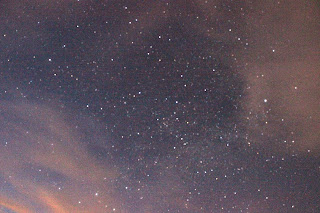 Squidy spent the weekend vlogging the trip on his phone.   They did a fire truck ride....﻿ 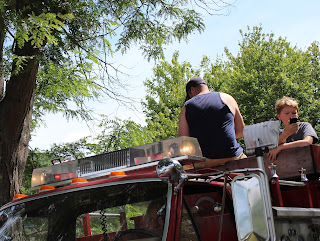 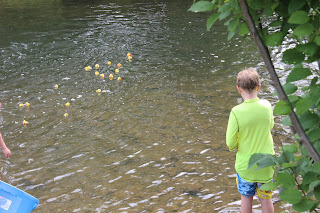 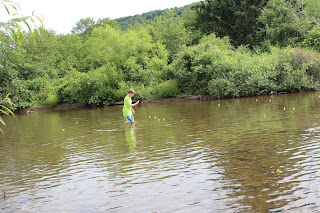 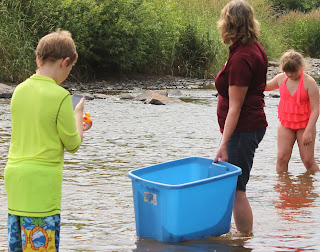 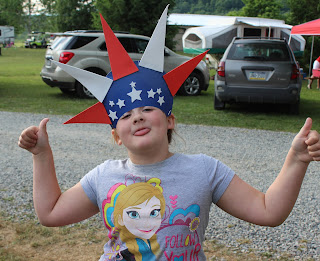 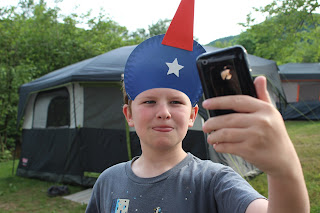 and played Bingo (which Squidy won).

We also watched fireworks, and discovered that Andy REALLY doesn't like them.  While we can often see fireworks from home (standing on top of the kids swingset at least), they usually aren't too loud at our house.  At the campground, they were very close and Andy was NOT happy.  Poor puppy. 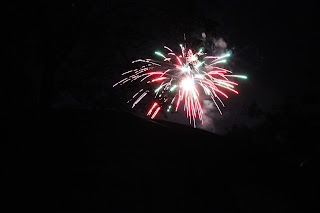 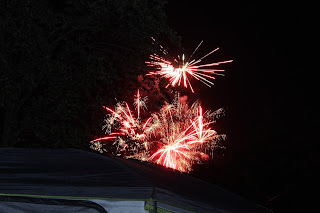 Andy would cuddle with his blanket when he got tired.﻿ 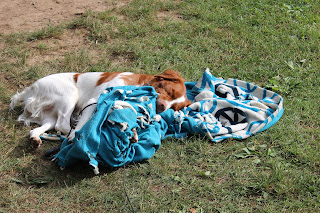 We ended up only making the one trip out to Cherry Springs because the weather was so iffy.  We were able to see quite a few stars just going around the campground.  Unfortunately for these shots I didn't have the focus on the camera set correctly so they came out blurry, but you can see the dipper and the Milky Way. 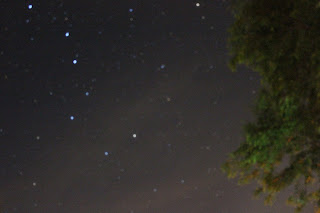 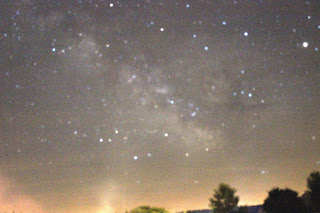 Our last morning at the campground, we saw a Bald Eagle flying up the river.  Of course I didn't have my camera out and ready, but I was able to get some of the other birds flying all around. 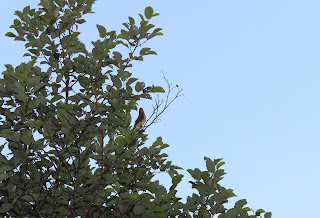 We had a fun time camping, the kids learned some astronomy, caught some amphibians, made some friends, and had fun running loose for the weekend.  ﻿
Posted by Dottie at 4:33 PM No comments: Links to this post