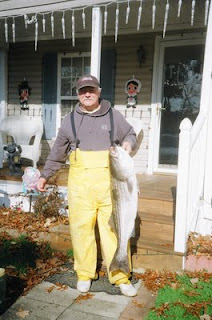 Posted by Dottie at 7:28 PM No comments: Links to this post

We got back into our Thanksgiving studies this week, even though its a short week. It seemed like a good time to do our crafts.
First we made a Thanksgiving Wreath. We glued foam fall stickers to a paper plate with the middle cut out. Vicki loves anything having to do with glue, so this was a big hit.  Georgie was very methodical in lining up the stickers on his wreath.  He finished with an almost symmetrical design. 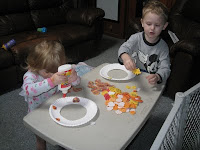 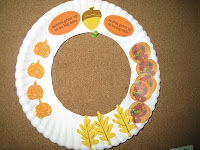 After the wreaths, we made the first of our Turkeys.   Georgie just glued his "feathers" to the back of the turkey's body.  Vicki seemed a little confused so she glued her's to a paper plate first and then added the turkey.  Once again, glue was a big hit with the little girl. 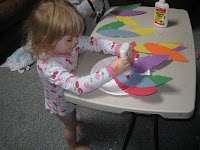 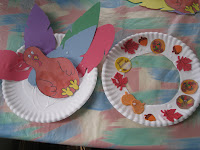 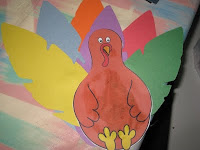 Georgie's turkey.
I don't like the way the glue makes anything printed on the ink jet change color and look weird but I haven't figured out a way around it yet. 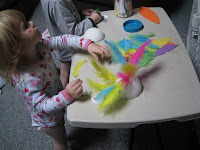 After the paper turkeys, we made baby turkeys by sticking feathers into a styrofoam 1/2 ball, then putting a turkey body on the front.  Vicki was definitely more into the feathers than Georgie.  He spent a lot of time coloring in his turkeys body but only wanted to add a few feathers in a very definite pattern. 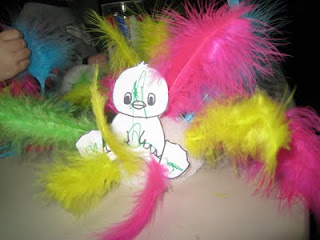 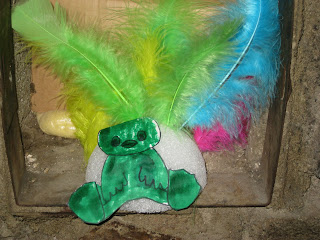 Georgie's baby turkey.
Our last project for the week was Cornucopia's.  Ask Georgie what a cornucopia is and he'll tell you "a cornucopia is a horn shaped basket filled with all the foods we are thankful for".  I wish I could say I taught him that but it actually came from Moose on Nick Jr.   Unfortunately, no pictures of the cornucopias, which were made by gluing pictures of fall harvest fruits and vegetables to a picture of a horn shaped basket, since both children went totally crazy with the glue and the pictures ended up getting stacked together before they were fully dry.
NEXT WEEK:  Greece!!!!
Happy Thanksgiving!!!
Posted by Dottie at 5:37 PM No comments: Links to this post

Email ThisBlogThis!Share to TwitterShare to FacebookShare to Pinterest
Labels: Holidays

Teenagers, preschoolers and toddlers....OH MY!!!!

We've still been keeping things pretty light.  We had our YMCA classes on Monday, Mom's Club meeting on Tuesday, the usual running around with Steph and most of what we did this week was play games and a little reading.

Vicki has been on a rampage this week getting into all the stuff that we thought was safely out of reach.  Not quite as bad as when she dumped all the fish food around their room, but bad enough.  Three rolls of toilet paper have been unrolled over the course of the week, she's scaling the fence around the fireplace and pulled out the candles and backing I had in recesses in the stone fireplace.   She emptied two boxes of wipes all over the floor, destroyed three boxes of tissues and repeatedly threw the diapers around.  I had to rearrange things to get all diapers, wipes and extra toilet paper out of her reach.   Between the two of them, Georgie and Vicki managed to totally destory the floor lamp in their room.  We're going to need to convert to a wall lamp of some sort.  So, it feels like I spent most of the week just following them around cleaning up messes.

Last night I took Stephanie to the midnight showing of New Moon (the Twilight sequel).  The theatre was running a special showing of Twilight right before it, which allowed for much better seating and less line waiting.  So, we arrived at the theatre at 7pm to line up, saw Twilight starting at 9pm, then New Moon at midnight.  We finally got home around 3am and, of course, Georgie was awake at 7am.  Sitting in a theatre in the middle of the night with hundreds of giggling, sighing, gasping teenagers - what a way to spend a night.  The things we do for our children.

Posted by Dottie at 8:58 AM No comments: Links to this post

Report cards came home from the high school today.  Stephanie got straight A's!  According to her, it's the first time since 4th grade.  She is taking a few "fluff" courses - Acting, Art and of course, PE  - but she's also on the College Prep course with Chemistry, Algebra 2, Sign Language and Latin 2.   Since she attends one of the top high schools in the state, has dance 5 days a week and cheerleading - this is quite an acheivement.

Posted by Dottie at 3:43 PM No comments: Links to this post

Things have been a little light the past few weeks.   We're shutting down our campsite so there's been a steady influx of stuff that places need to be found for and laundry to be washed so it can be stored.  I've also been reviewing some of what we're doing since Georgie seems to be getting bored a lot.  I've decided to take a break from The Reading Lesson.  He already knows most of the letter sounds so the concentration on a few letters at a time wasn't interesting or challenging enough.  We're trying Progressive Phonics which is a free program that uses simple readers.  So far, Georgie seems to like it much better.  We're starting with the first reader (short a sound).We're also doing more games.  I found a generic board game online and modified the cards to emphasize what we're learning.  So, Georgie will roll a dice and pick a card.  The card will have a word to read or something to act out.  For example, I'll tell him he needs to read and act out the phrase "I am a big duck".  He's having fun with it but, of course, Vicki also wants to play.   We're managing but it definitely doesn't resemble any traditional game-playing I've ever seen.  Vicki is learning to give Georgie the dice when its his turn so I guess that's progress.

We've also talked about getting a more structured Math program after the Holidays are over.  I've looked into a lot of them and Math U See seems like a good fit for Georgie.  He's already counting to 100 and doing simple addition problems.  Since he's a very visual learner I think the manipulatives and DVD's of Math U See will be fun and educational for him.

We're studying Thanksgiving (including Native Americans and Pilgrims) for the next few weeks.  So far, we've read The Very First Thanksgiving Day by Greene, The Very Last First Time which is a story about a Inuit girl, and a few Native American legends.   We discussed totem poles but our attempt to make some didn't go too well.  The kids had trouble gluing their images to the paper tubes so we ended up putting them on paper.  I didn't really expect Vicki to line them up but Georgie also decided that a pole wasn't what he was shooting for.  I have to remember that Georgie really, really prefers more open-ended crafts.  He doesn't particularly like following directions in his worksheets so why would he with his crafts?  We may end up with some very interesting looking turkeys in the next few weeks.

Our Totem "Poles".  Vicki's is actually the more complete one, Georgie doesn't like getting his hands sticky from the glue. 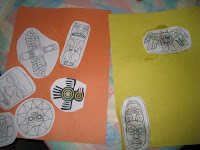 Attempting to play our board game. 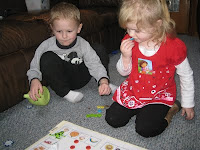 Vicki has been playing a clothespin color matching game.  Each index card has a color name on it written in the correct color.  Each clothespin is painted with a color.  She matches up the correct clothespins with the correct index cards by clipping them on.  She did two of them, decided they made great wings and "Mommy I'm flying". 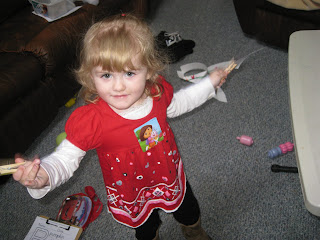 Posted by Dottie at 11:56 AM No comments: Links to this post

Our theme for this week was Halloween and Pumpkins.  We started the week with a trip to the Pumpkin Patch.  Thankfully, after a really bad thunderstorm Saturday, Sunday ended up being the perfect Fall day - sunny and beautiful.   The Farm had all kinds of activities but we settled on just the bouncy house before heading out on the hay ride. 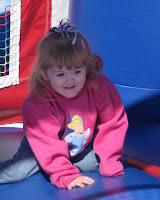 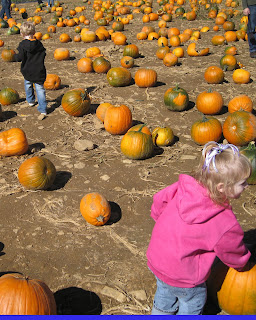 Searching for the perfect pumpkin. 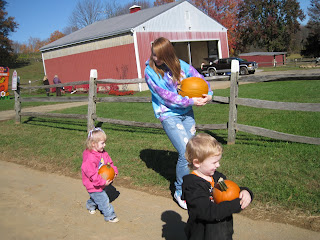 Success at last.
That night was our town's Trunk or Treat - an activity where people decorate their cars, park them together in a public lot and kids can "Trick or Treat" from car to car.  This is the first year Vicki is really aware of what is going on.  She had a great time and said "Thank you" to everybody. 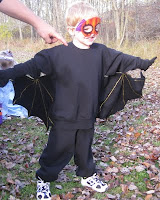 Georgie was a bat. 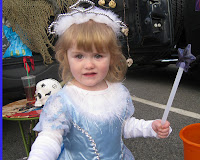 Vicki was a Princess.  She wore one of her dress-up outfits.  This is probably the last year we can get away with picking her costume for her.
During the week, we painted some of our pumpkins.... 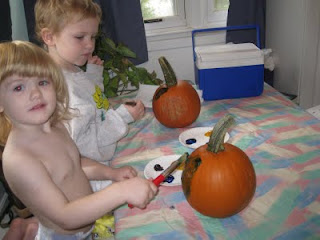 and cut one open so we could see what's inside.  Georgie did not want to have anything to do with the "icky stuff" but Vicki was right in there with her own spoon scooping out seeds. 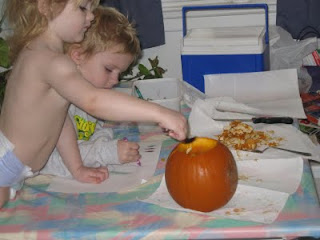 After letting the seeds dry out overnight we used some of them to make pictures showing what the inside of a pumpkin looks like.  We glued a yellow pumpkin shape to an orange pumpkin shape, then added strips of orange paper for the "icky stuff" and glued on seeds. 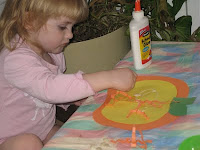 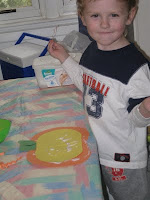 We read a few stories about Pumpkins and watched "The Magic School Bus Goes Batty" to finish up our Halloween theme for the week.
Georgie just recently started getting very interested in counting to 100.  He can do most of it with very little prompting but to help reinforce it we're playing some games using the 100 chart.  His favorite so far is to use a die and, starting at one, move a marker the number of spaces rolled until he reaches 100.   He's doing very well at identifying the numbers he lands on.
For reading, he pretty much knows all the letter sounds so we're working more on sounding out words.  I laminated a bunch of lotto sheets - a 3 x 3 grid with a word in each space - and he enjoys crossing out each word as he reads it or finding them as I read them (throwing in a few that aren't there but are close to see if he's really paying attention - ex.  "find got" when only "get" is actually there).  I just discovered that he recognizes the 9 most common color words (red, blue, yellow, green, orange, purple, pink, brown, black).  We're also working on reading "Hop on Pop" and "One Fish, Two Fish, Red Fish, Blue Fish".  Right now, he can get through almost half of each one with a little prompting.
We finished up the week celebrating Grandpa Charlie's wedding.   Since it was on Halloween (but I had already taken apart Georgie's bat costume) the kids dressed up as an Eagles football player and an Eagles cheerleader (clothes they just happened to have). 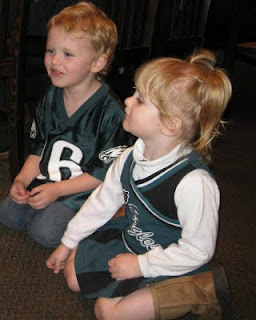 Posted by Dottie at 5:47 PM No comments: Links to this post