The kids had the second meeting of their new 4-H group this week.  Despite being brand new and knowing nobody, George was the first to volunteer to do a speech.   He did a great job, with lots of "showmanship".  :-)    Not bad for his first research project AND first presentation.

The file was too big to attach here but is available at youtube: http://youtu.be/ur1PynZ0oFs

After the speeches, the kids made ornaments to bring on an upcoming Caroling trip to a local nursing home. 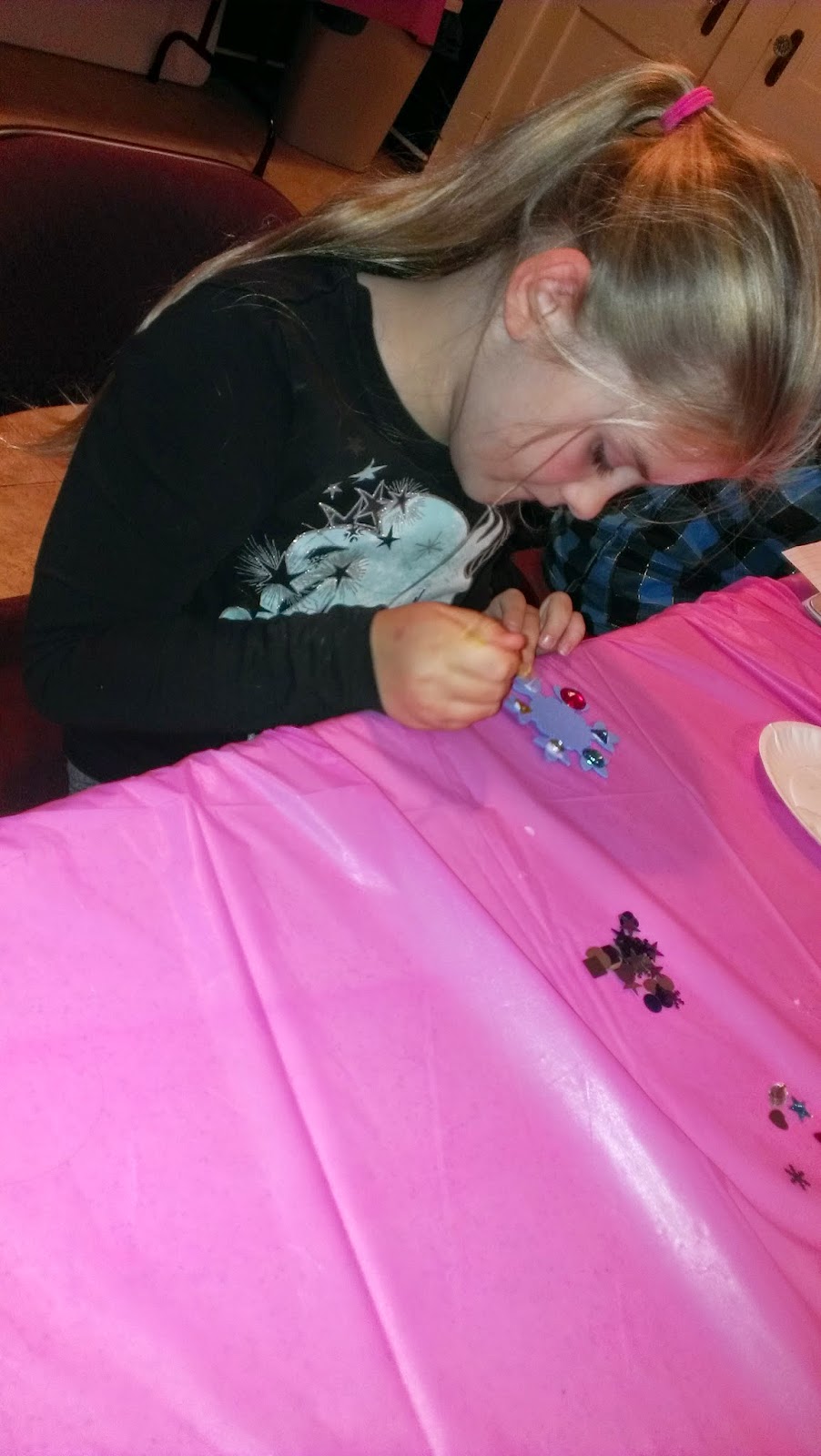 Both kids were happy - George got to be the center of attention and Vicki got to play with glue. :-)

We haven't brought Galactic to 4-H with us yet.  The first meeting we weren't sure what to expect.  This week's meeting it was bitter cold out and Galactic was getting ready to shed, so he stayed home where it was nice, warm and safe.

Posted by Dottie at 8:19 PM No comments:

October (plus a week of November) Wrap-Up

As I mentioned last wrap-up, I’m going to switch to monthly (sort of) wrap-ups to cover all the details of the daily work, and do separate posts for history, science, field trips, projects, etc.

Handwriting: Vicki has resumed copywork with The Wand and also has done an absolutely adorable booklet on Columbus using Draw/Write/Now (but you won’t get to see that one until I write up their Explorers unit).  She worked with the stories – Frog and Toad Are Friends, Frog and Toad Together and Harry and the Lady Next Door.   I think her handwriting isn't bad for a 7 year old. 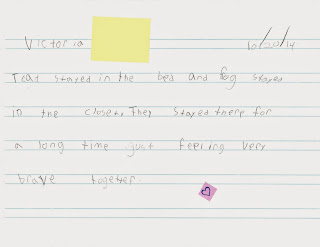 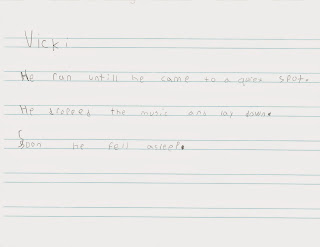 Evan Moor Daily Reading Comprehension Grade 2:  She has no problem answering the questions and discussion the passages.  She’s learning the difference between Fact and Opinion, how to find a Main Idea, proper Sequencing, and Inferences.

Evan Moor Grammar and Punctuation Grade 2:   Vicki has continued on to learning about Verbs, Compound Words, Pronouns, Contractions, and how to determine when to use I or me, Us or We and Them or They.

Evan Moor Word-A-Day Grade 2:   We combine this with learning how to use a dictionary by having her look up the words each day.  She often goes off on tangents looking up words that interest her.  The latest words she had to study were topple, zany, putrid, echo, infant, ability, dynamo, trivial, camouflage, hue, wince, compromise, flimsy, grant, talented, and opinion.

The (slightly crazy) answers she gave to the follow-up questions for this list:

Do you like acting zany or being around someone who’s acting zany? Why or Why not?  Yes, I like to fool around.

Have you ever smelled something putrid?  What was it? What did you do?  Yes.  Poop in the toilet.  I’d flush.

If you were in a place that made a good echo what would you like to say?  Hi me.

In addition to the very obvious digraphs and diphthongs being studied, these units also worked on writing a complete sentence, proper punctuation, correct use of they or them, writing a personal narrative (Vicki’s consisted of “I like reading and music.  I also like math.  My brother likes writing.”), capitalizing names, capitalizing I, greeting and closing of a letter, rhyming words, nouns, pronouns, using commas in a list, adding –ed by doubling the consonant, and writing a letter.

She also had to write a list of what she would take on a trip to space.  She's overly optimistic with the multiple Ipods and Ipad. 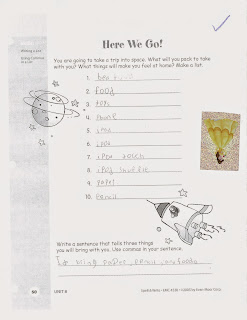 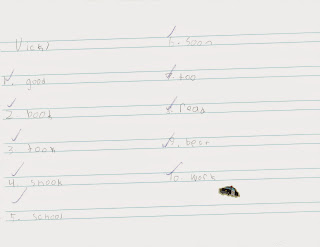 Reading:
The kids spend an hour reading for school each day, and additional time reading in the evening.  They keep a reading log of what they read during school.  Vicki has been working her way through the entire Babysitters Club Little Sister series.  She is also reading the books for The Wand, lots of her Cat in the Hat Learning Series.

Math Mammoth 1B:    She has moved on to 2B while finishing up the Time and Money chapters from 1A.  She is struggling a little bit with remembering to regroup in subtraction but it appears to be more from rushing than from not understanding the concept.

Scholastic Success with Addition/Subtraction Grade 2:  A nice fun way to drill math facts with pretty pictures of butterflies and flowers. J  She has about 10 more pages left.

Vicki will be starting Evan Moor Daily Word Problems soon.  Hopefully this will help her work on setting up problems - lining up the places properly.

Copywork/Writing:  George is continuing along with Writing with Ease 1.   His cursive handwriting is not too bad but he still has a little bit of trouble with the narration and answering in full sentences.

He worked on Little House on the Prairie, On the Banks of Plum Creek, All of a Kind Family, The Giant Crab and other Tales from Old India and the poems “The Sandpiper” and “The Nightingale and the Glow Worm”. 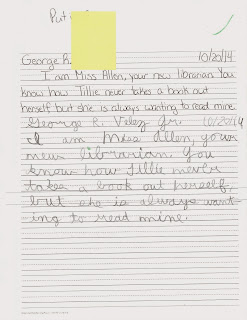 Evan Moor Skill Sharpeners Spell and Write Gr 5:  George only has one more unit left in the Grade 5 book.  He continues to get all his spelling words correct on his weekly tests and there is evidence that he is able to carry that over into other writing.

His words for the latest units were: rough, enough, fragile, few, physical, misbehave, unimportant, unable, disappoint, stuffed, disagree, and misunderstood, which were included in a passage on the Life of a Colonial Child (how handy that it’s their next unit in history!) and prehistoric, bicycle, prevent, inconvenient, inconsiderate, preview, import, action, cyclone, portable, impatient, and automobile, with a passage about the history of chewing gum.

Each of these units has a page with a picture to write the words on.  George has been getting more and more creative each time.  The Colonial child unit featured a picture of a cooking kettle.  He decided to use the words in a recipe. 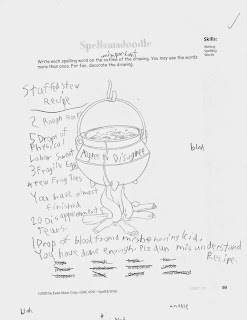 2 rough rocks
5 drops of physical labor sweat
3 fragile eggs
a few frogs toes
You have almost finished.
20 disappointment tears
1 drop of blood from a misbehaving kid
You have done enough. 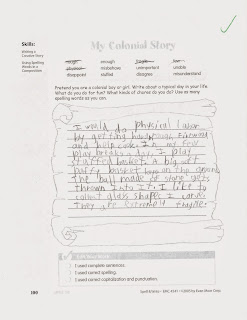 For the gum unit, he had an assignment to write a couple of Cinquains.    I thought he used some great vocabulary in both of them. 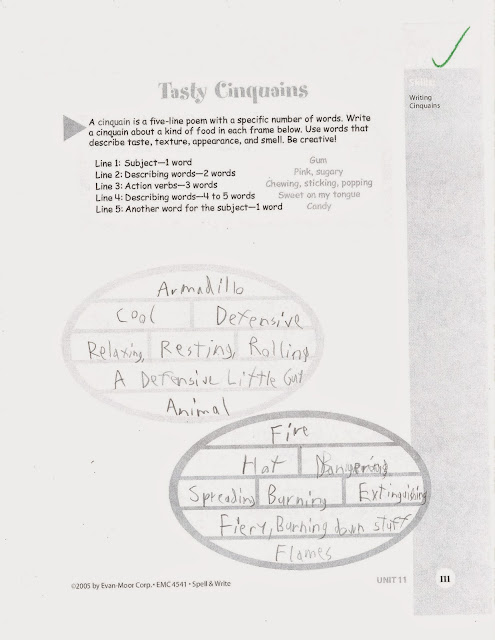 Scholastic More Proofreading Practice Please: Where he gets to apply what he learns in grammar and spelling.

Evan Moor Daily Reading Comprehension Gr 5:  These units have worked on similar topics to Vicki’s – Cause and Effect, Fact and Opinion, Sequencing.

George’s answers to the follow-up questions:

Describe a hazardous situation you have seen or know about.  The destruction of Pompeii.

Share some examples of ingenious ideas that you or someone else have had.  A giant ice cream robot.

My favorite knickknack would be a yellow glass cat.

Should parents be strict or lenient with their kids about bedtimes?  They should sometimes be a little lenient if they are: doing extra schoolwork or reading.

What is a narrative that you have enjoyed reading? Diary of a Wimpy Kid.

Which books or tv shows are your perennial favorites?  Diary of a Wimpy Kid.

The newest Diary of a Wimpy Kid book came out last week and I think he has read it at least 4 times already.  J

Math Mammoth (4B): George has been successfully working through long division, long division with money and is learning how to calculate averages.  Long division has been giving him less trouble than some “easier” math because he has no choice but to write it down and do it step by step.   Probably the start of a new trend as math is just going to get more complicated from this point on.

Evan Moor Daily Word Problems – Grade 4:  He is starting to write out the problems a little more often.  Many of them require filling in a table or applying the answers.

Swimming is still going well.  George is starting to put a little more effort into it, probably in the hopes that his sister won’t get any further ahead of him.

The kids had their first meeting of the Herpetology Heroes 4-H group and George volunteered to do the first presentation.  He is working on his report on fire salamanders, which he will be presenting next week.

I’m still hoping to start Geography and Art pretty soon but it may end up waiting until after the Holidays.

The kids have been working on Simple Machines in Science, Explorers in History, and using Studies Weekly to do a short unit on Health.
Posted by Dottie at 9:45 AM No comments:

I figured I had better get my Halloween/Fall post up before the snow came. ;-)

We are having a gorgeous fall here in NJ.  Lots of bright colors and blue skies.  The past few years it seems it was either really wet and the leaves all went brown, or very windy and the leaves fell off the trees too fast. 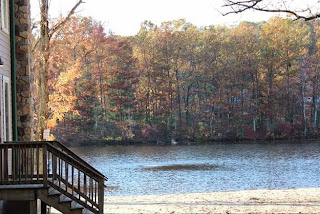 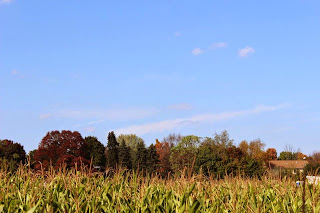 We made a trip out to the local pumpkin patch and had a great time on the Hay Ride, running through the corn maze and picking out our pumpkins.  Vicki pointed out to all of us that George was operating a Class 2 Level when using the wheelbarrow (they are studying Simple Machines and applying what they learn!!). 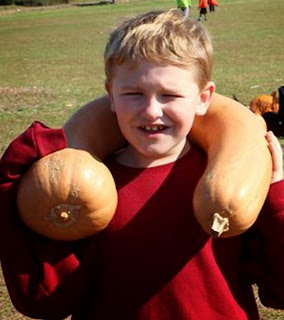 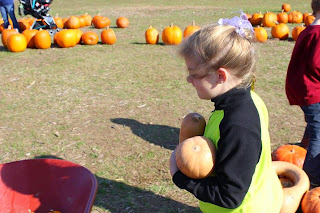 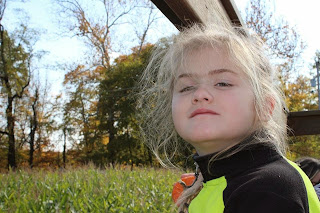 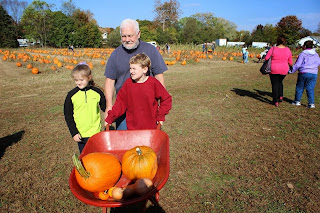 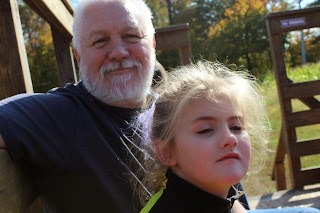 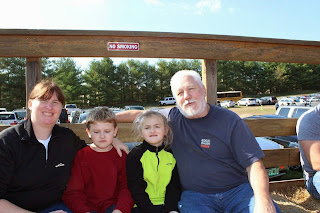 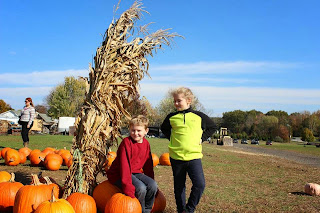 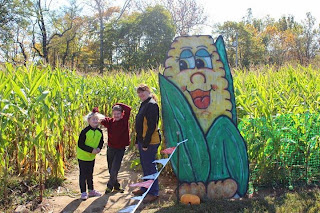 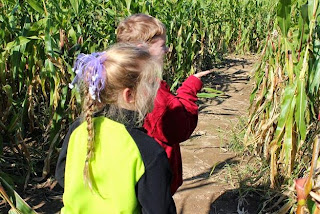 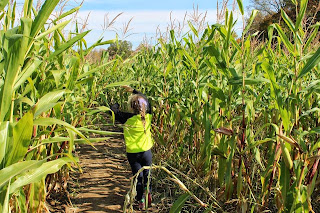 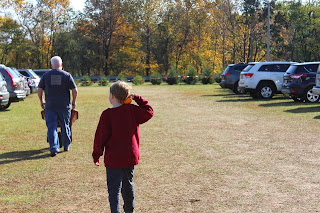 Once we returned home, the kids painted their pumpkins, while I tried my hand at a Jack Skellington. 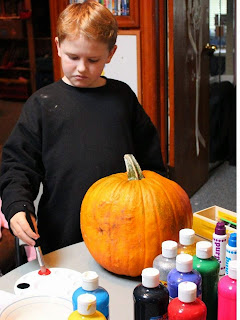 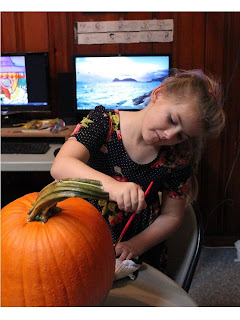 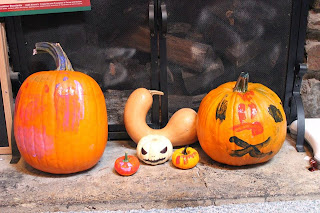 Jen took them to a much larger (10 acres!), much harder corn maze where they spent HOURS working through a very complicated maze, assisted by clues.  This years maze had clues dealing with New Jersey History - very educational. :-) 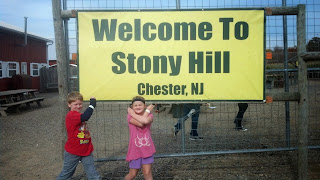 Halloween was all about Minecraft this year.  Vicki was an Enderman and George was a Zombie Pigman.  I thought their costumes came out pretty good and they were happy with them.  We went to our town's Trunk or Treat, a party at the lake club, and Trick or Treating on Halloween night at Granny Kaye's house. 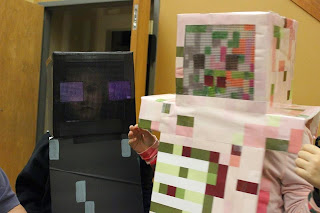 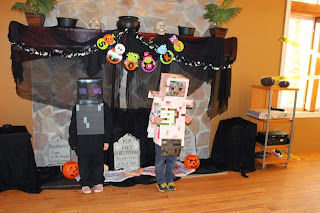 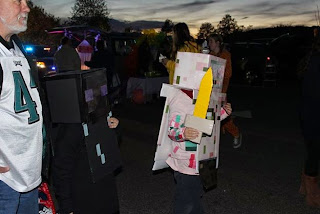 Posted by Dottie at 7:31 AM No comments: